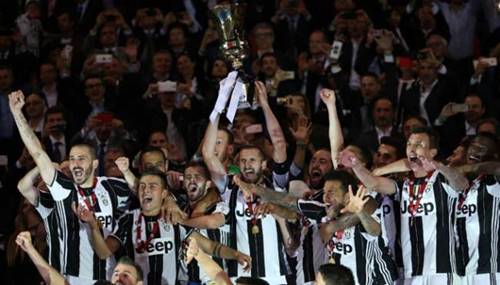 The winners of Coppa Italia qualify to UEFA Europa League. Coppa Italia contested by Italian club in several hierarchy in Italy, such Serie A, Serie B and Lega Pro. Serie A clubs dominated this competitions and almost guarantee the champions list every year, giving their strength and squad depth rather than clubs in below competitions like Serie B or even Lega Pro.

Juventus also recognised as the most succesful clubs in Coppa Italia, having won 13 out of 17 finals. I Bianconeri also become the most champions club in Serie A and most domestic trophy in Italy. AS Roma is the next best teams in this competitions with 9 champions while Inter Milan and Lazio claim third spot with 7 winners. Other big club in Italy such Napoli (6), Fiorentina (6), and AC Milan (5) also several times won Coppa Italia from years to years.

Most Trophies Won by Club

That is the table list of Coppa Italia winners to date with Juventus crowned as recent Coppa Italia champions 2016-2017. Juventus also become the most trophies won by club in Coppa Italia with 13 times as champions, followed by AS Roma (9) and Inter Milan (7).